Bulls in Charge…for Now at Least Every since the S&P 500 (SPY) made new lows in mid June the bulls have been back in charge. At first it looked like your typical bear market rally. However, there are more and more signals going off that this may be the real deal. As in the new bull market may have arrived. That topic is a big deal as one’s outlook, bullish or bearish, weighs heavily on how they construct their portfolio for the days and weeks ahead. That is why we will focus on that topic in today’s commentary. Read on below for more….

(Please enjoy this updated version of my weekly commentary from the POWR Value newsletter).

Just like George Washington…I can not tell a lie.

I have been downright bearish since mid May. At first that strategy paid off gangbusters as stocks tumbled to new lows by mid June. And since then being a bear has been…unbearable!

In fact, earlier this week presenting at the MoneyShow I doubled down on my bearish view with this new presentation entitled: Bull or Bear…Which Is It?

My goal was to give a balanced view of the bull case versus the bear case. Indeed there are some reasons to be bullish. Beyond the obvious price action taking place you have signs that…

Note I could spend the next hour poking holes in the above bullish arguments. Instead I will just simply say that the for me the preponderance of the evidence still points bearish.

Because yes it could be true that we may have skirted a recession to date, but that doesn’t mean that we will avoid one in the near future with lower prices on the way.

Meaning that inflation may be peaking…but coming down from 8.7% to only 8.5% should not lead anyone to breathe a major sigh of relief.

Especially as that data is as of the end of July. Since then the commodity index has spiked higher as you will see below which means that inflationary pressures are far from gone. 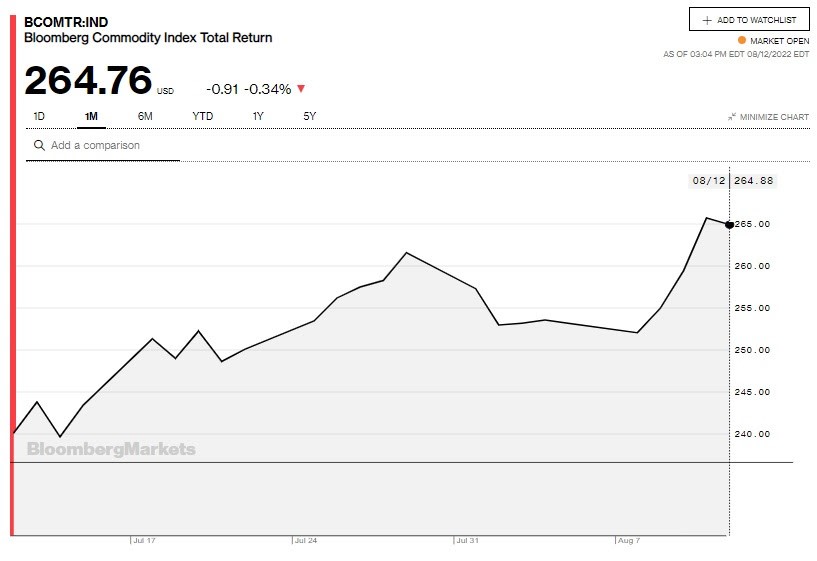 Add on top a non-stop parade of Fed officials singing from the same song sheet that goes like this:

We are going to seriously raise rates…yeah, yeah, yeah

We don’t care how much it makes your teeth grate…yeah, yeah, yeah

We just need to stop prices from so much inflate…yeah, yeah, yeah

As those rates go higher it makes borrowing less attractive. This leads to less investment by companies. Which equates to lower spending.

Typically that cycle extends to lower profits, job loss and wider economic pain. And yes, these would all be tell-tale signs of recession and bear markets.

For now, it is clear the bulls are in charge. The next real test is at the 200 day moving average currently at 4,328 (about 1% above Friday’s close). No doubt there should be serious resistance at that level that will test the conviction of investors.

The more they see the potential negatives blowing away…the more buyers there will be in the stock market (SPY)…the more likely we break above 4,328 and get back to resumption of a new bull market.

However, if that foreshadowing of future recession grows larger, then investors at first will pause this rally higher to await further signals. And the more ominous the signals…the more share prices would recede.

You could almost liken it to a tug of war. Whichever side has stronger evidence will pull investors in their direction.

Again, I see the potential for the next bull market to start now. Just think that the bearish outcome is more likely. Now we just need to objectively review each new round of economic data as it comes out to be on the right side of the tug of war with our investment strategy.

We haven’t talked about performance in a while. Gladly today’s surge pushed POWR Value portfolio back into positive territory on the year which is much better than the still 10% loss for the S&P 500 (SPY) in 2022.

Helping matters is the strong earnings season by our portfolio with most seeing estimates and target prices rolling higher after their announcements.

Our strategy for POWR Value at this time remains 50% long. It will be hard for me to agree to a more aggressive posture until we have cleared the hurdle of the 200 day moving average at 4,328.

If that does unfold, then we will get back to adding more stocks scoring highly on POWR Ratings and value metrics.

The last several weeks has reinforced the lesson of how difficult it is to time the market. That is why so few professionals will not attempt it as it is so easy to get twisted up in knots.

And I sense that the market is not done serving up mixed messages to keep people dazed and confused.

Likely the pathway becomes clearer after the battle over the 200 day moving average. Lets watch that closely and adjust our portfolio depending on what that tells us.

If you’d like to see more top value stocks, then you should check out our free special report:

What makes these stocks great additions to any portfolio?

First, because they are all undervalued companies with exciting upside potential.

But even more important, is that they are all Strong Buys according to our coveted POWR Ratings system. Yes, that same system where top-rated stocks have averaged a +31.10% annual return.

Click below now to see these 7 stellar value stocks with the right stuff to outperform in the coming months.

About the Author: Steve Reitmeister

Steve is better known to the StockNews audience as “Reity”. Not only is he the CEO of the firm, but he also shares his 40 years of investment experience in the Reitmeister Total Return portfolio. Learn more about Reity’s background, along with links to his most recent articles and stock picks.

The post Bulls in Charge…for Now at Least appeared first on StockNews.com

Why Every Entrepreneur Should Learn to Code