Coming out of a pandemic that rocked the world and put virtually everyone in a state of lockdown and isolation, at-home amenities have never been so desirable.

When Covid hit the U.S. in March 2020, those paying top-dollar for luxury buildings and desirable locations were suddenly left with what they had in-unit and on-site, which made the affluent buyer reconsider what amenities were truly important to them.

The Bentley Residences, which are set to be completed by 2026, aim to give them everything they’re looking for.

Related: CEO and Chairman Adrian Hallmark Wants Bentley Motors to Be the Most Sustainable Luxury Automotive Manufacturer In the World. He’s Well on His Way.

The luxury car brand announced its partnership with Gil Dezer and Dezer Development in 2021, detailing residences that will span 61 stories in coveted Sunny Isles Beach, Florida, making the building the tallest residential tower on any U.S. beachfront. 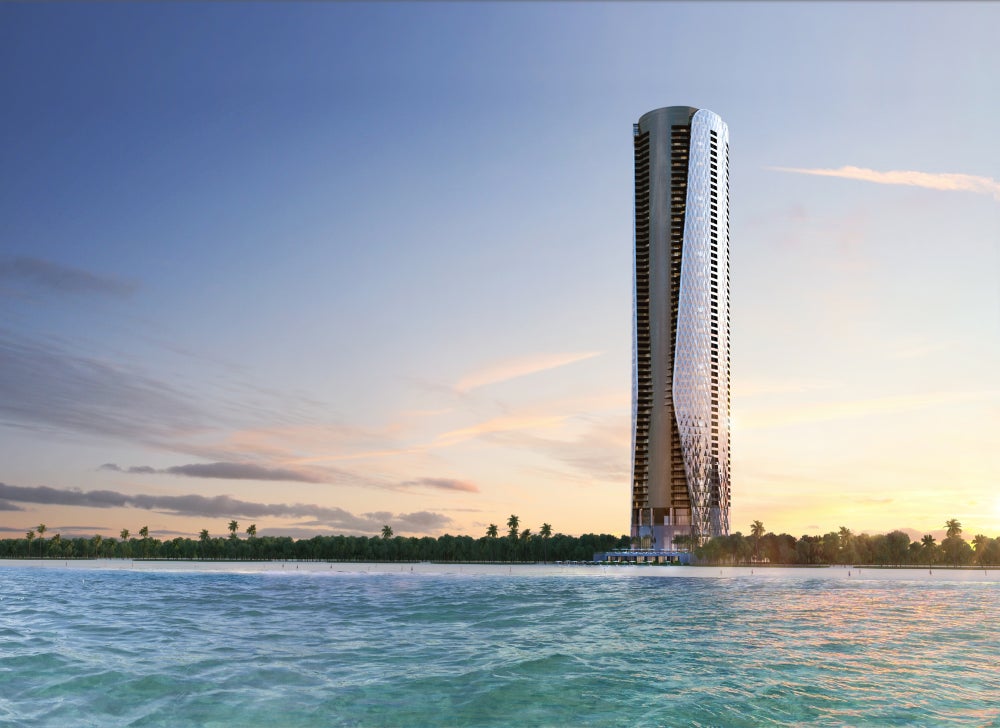 Dezer, a prominent developer and entrepreneur in the Miami residential luxury space, made waves in the industry for developing the famed 60-story Porsche Design Tower, and he promises that the Bentley project will be even more iconic.

The Bentley Residences, which are furnished by Bentley Home and designed by Sieger Suarez Architects, epitomizes the evolution of the 100-plus-year-old car brand and will range in size from 5,500 to 6,000 square feet, not including the penthouse unit, which is around 29,000 square feet and has an 11-car garage. Prices are expected to start at $4.2 million per unit and range north of $50 million for the penthouse. 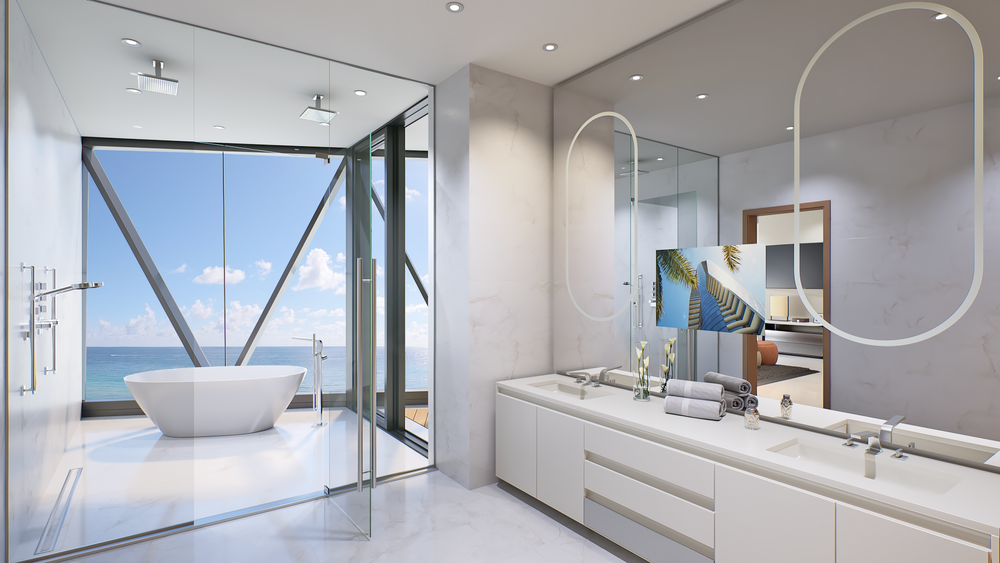 Boydell incorporated the Bentley brand into the design of the building without printing the logo on everything as you might expect from other brand-to-brand collaborations. Design touches include walls lined with the signature Bentley walnut wood, leather piping, and diamond-shaped glass panels and flooring. 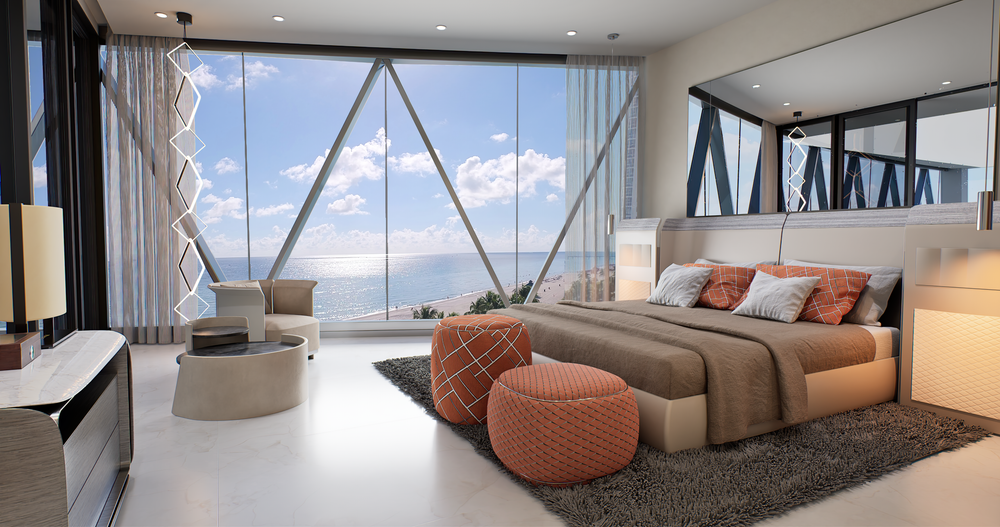 “To me, it was important that people distinctively see that this is a diamond-shaped building,” Gil Dezer says of the building’s unique architectural design. “Miami has always been that market that changes the game for the rest of the United States. Every place in the United States is square buildings, but we get to play with shapes.”

Related: Sustainability in a Broader Sense: How Diversity Initiatives are Setting Bentley Motors Up for Longevity in the Luxury Sector

In renderings, the core of the building appears to be enveloped in two diamond-paned glass wings, meant to invoke both the car brand’s logo and the diamond shapes used in its signature grilles.

“This was a big development process to be able to find this glass, which also has high thermal properties as well this kind of semi-mirroring to it,” Boydell says. “It came with a very big price tag to be able to add that layer of this outer casing and these diamonds.” 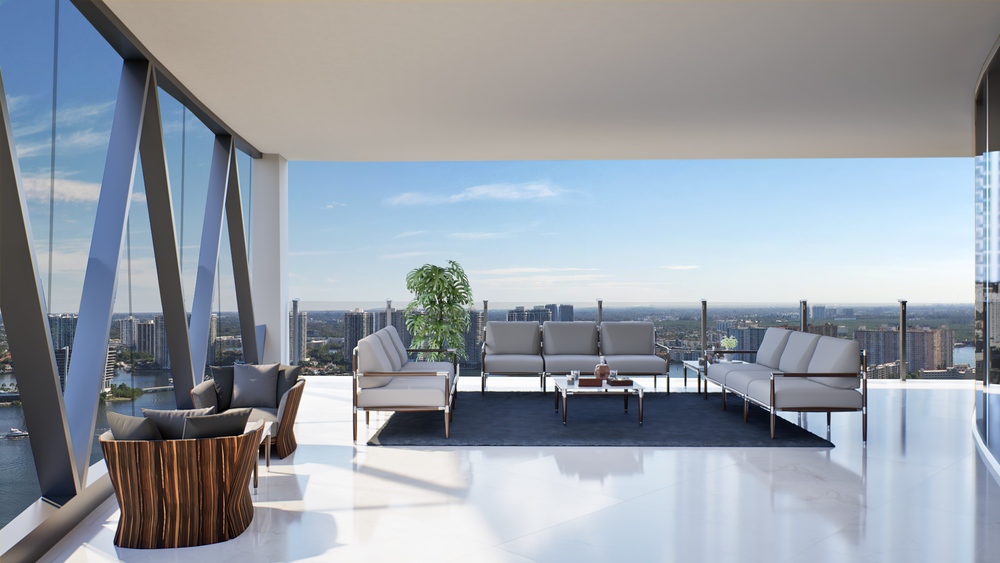 Each unit will contain its own pool, a massive balcony (with covered seating in case of rain or inclement weather), an outdoor shower and more.

As for communal amenities, if you name it, the building probably has it.

Highlights include a spa and wellness center, indoor and outdoor gym with ocean views, pet spa, 14-person movie theater that can be rented for private use, full bar and restaurant, game room with VR technology (including golf and driving simulators), cigar lounge and private Bentley Beach Club.

But perhaps the most innovative amenity of all will be the cheekily named Dezervator, an automated car elevator that will take residents directly to a private parking spot in their unit without having to interact with anyone along the way, something Dezer says has been a major point of contention for affluent residents in luxury condo buildings. 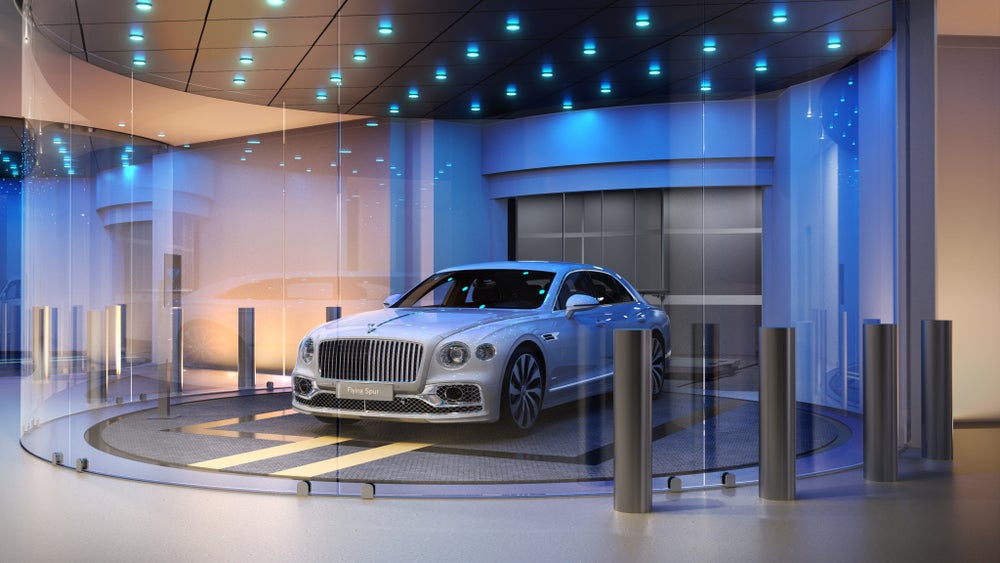 “Everybody hates getting in the car with sweaty valets running around, changing the radio, moving the seat around and finding new scratches,” Dezer explains. “You should get your car back the way you gave it.”

Running the Dezervator is a complex operation, but the experience for residents is meant to be seamless. 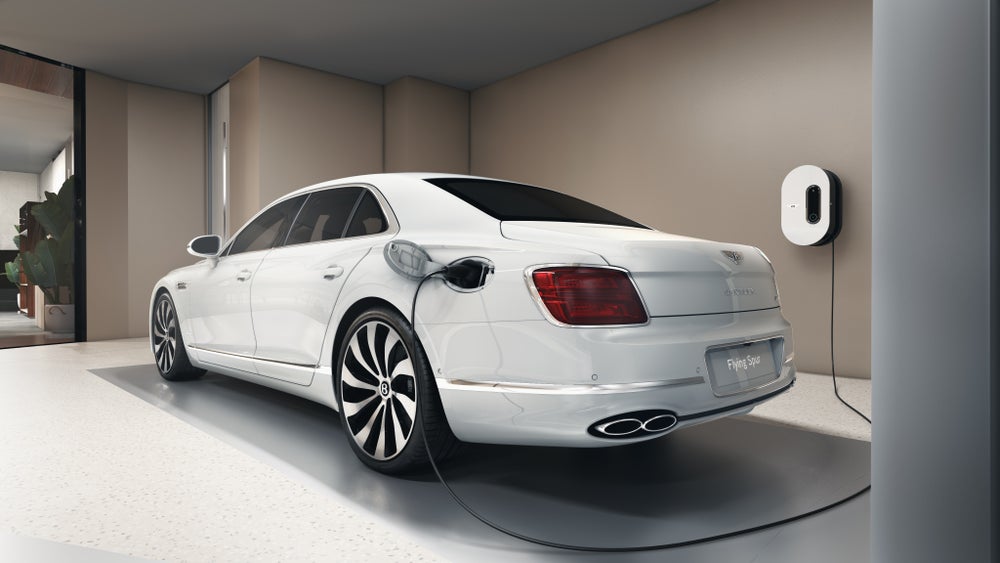 When residents arrive home, an RFID sticker inside each of their cars will automatically summon a robotic elevator. A lighting system then guides the driver to the correct lift, which will automatically deliver the car (and driver) to their unit without having to press a button or exit the vehicle.

Related: I Drove a $2 Million Bentley That’s One of Only 12 In the World and Lived to Tell the Tale

The driver then parks the car in a spot right outside of their living room, which is lined with glass panels so the vehicle is visible from within the unit. Think of it as a major step up from elevators that deliver residents directly to their unit in luxury high rises. Each condo will have at least three parking spaces.

Dezer says that the largest car the Dezervator can hold is a Suburban XL, and the heaviest is the Rolls-Royce Phantom, which weighs nearly 6,000 pounds. 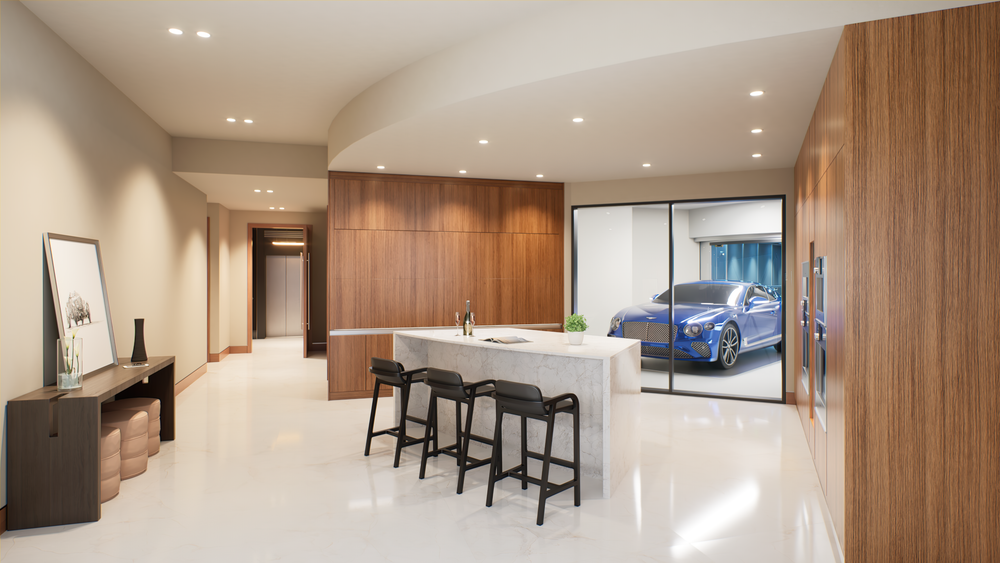 The housing market across the U.S. has cooled as the Fed raises interest rates to combat soaring inflation. A recent study by RealtyHop showed that Miami is currently the most expensive housing market in the United States, with data indicating that the average family would have to set aside a whopping 87.39% of its annual income to be able to afford a home.

But that doesn’t worry Dezer, who has already sold more than 50 units in the tower and explains that the target customer understands that these are “long-term projects,” not those looking to relocate immediately. 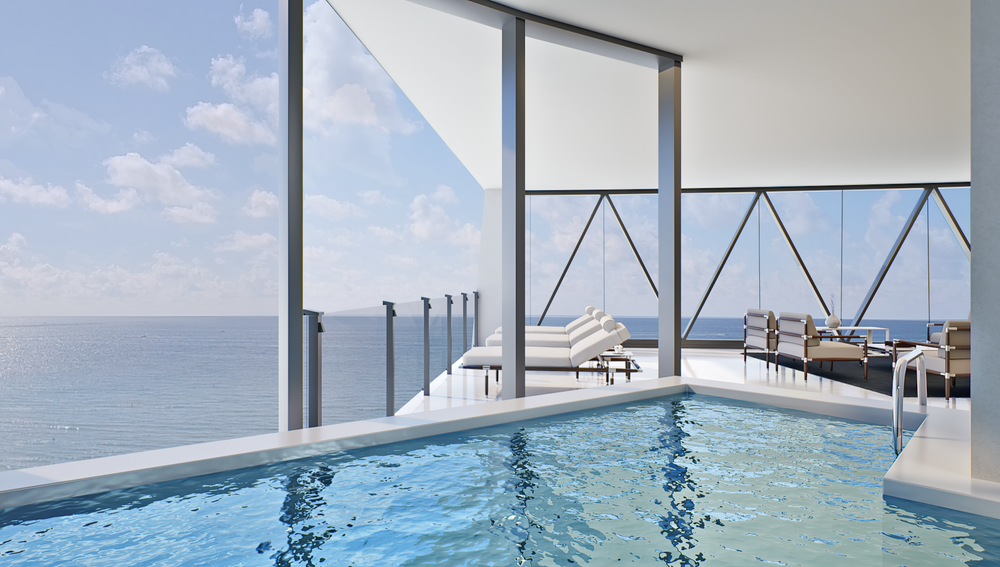 “We’re selling for the future,” he says. “We’re selling to the people who are making plans. We’re going to have to survive markets going up and down, to try and time it is like [trying to] catch a falling knife.”

Because as Dezer knows, regardless of the state of the housing market at any given time, the luxury buyer isn’t going anywhere anytime soon, especially as developers continue to up their game.

“People come and see what we’ve evolved the condo into, and what a revolutionized apartment looks like,” Dezer says. “If you’re a condo person and you come to see this — you can never go home.” 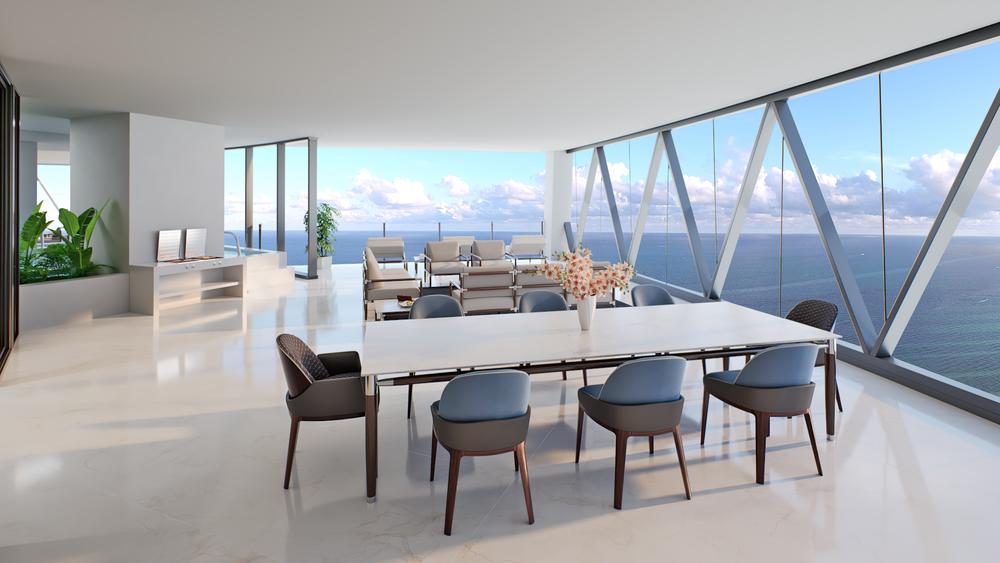 TikTok is Losing it Over Designer Finds at Costco