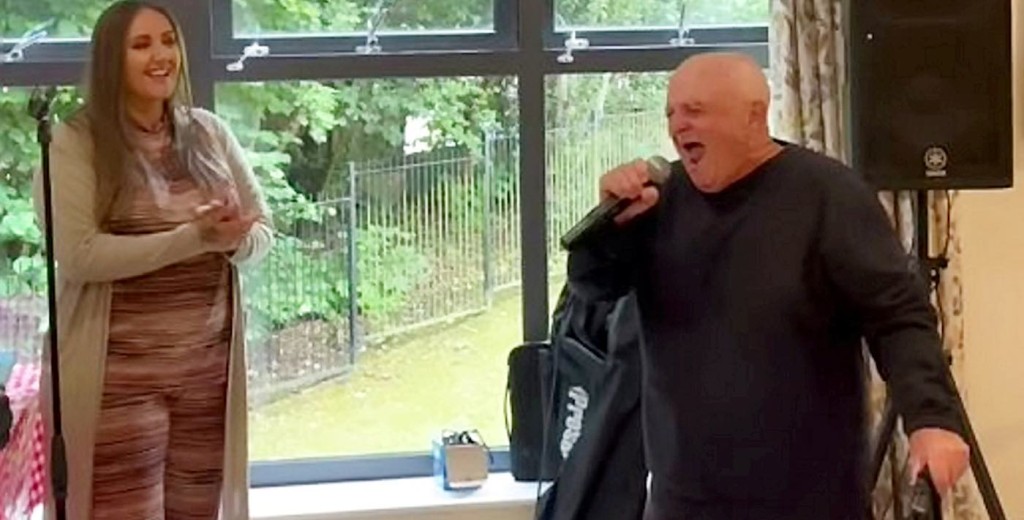 An 81-year-old stunned everyone with his note perfect rendition of ‘Unchained Melody’, by The Righteous Brothers, after asking to take the microphone at a nursing home party.

Guests at Park View Nursing Home in Liverpool had enjoyed a performance from local vocalist Toni Nesbitt, when Dave Williams asked if he could sing a song himself.

Dave then stood up and blew the entire room away.

“When I got up my daughter was begging me to sit back down,” admitted Dave. “But I’m glad I didn’t!”

“Someone in the audience was a patient with dementia—and after my performance I saw her singing the song to herself, which was brilliant.”

The performance would have come as no shock to those who know Williams, because he had sung with The Beatles a couple times.

As a teen, Dave played with his band called The Dices, and in 1958 they appeared alongside soon-to-be Beatles drummer Ringo Starr at the Morgue Skiffle Cellar in Liverpool, though the 18-year-old Ringo was not yet a superstar.

Dave decided to go solo when he was 17 and secured a gig singing on weekends for £3 a night at a small club. He then sang with The Beatles at Knotty Ash Village Hall in Liverpool in 1961—after his friend asked the band members if he could get up and join them.

He also performed in front of hundreds of people, including Mel C. of the Spice Girls, at Paul McCartney’s 58th Birthday in 2000 at the Linda McCartney Centre, in the Royal Liverpool University Hospital.

“It was all surreal and something I will never ever forget. The gig at Knotty Ash was a bit awkward. I may have been a bit out of key but I got a good clap! But, at Paul’s birthday, people from around the world came to be there.”

KINDNESS: Anonymous Shopper Buys Iconic Pantera Guitar For Young Rocker Who Always Came in the Shop to Play it

An employee at the nursing home described how stunned audience members were at his incredibly passionate performance and powerful voice.

“Words can’t explain how we all felt after his performance—and he has said he would love to perform for us again.”

She shared the video of Dave singing (see it below) to the Park View TikTok profile, where it amassed over 500,000 views. The incredible online reaction has been astounding for Dave—who doesn’t use social media, and had never heard of TikTok before.

WATCH: Adorable Dash-cam Video Shows Father and 6-yo Belting Out Sinatra’s ‘Me & My Shadow’

The octogenarian, who retired as a medical assistant for the UK’s National Health Service after nearly 50 years, was dumbfounded when he went into his favorite local shop the following day and the whole place was clapping and cheering for him.

Who Is Ezra Miller? The Out-of-Touch Adults' Guide to Kid Culture