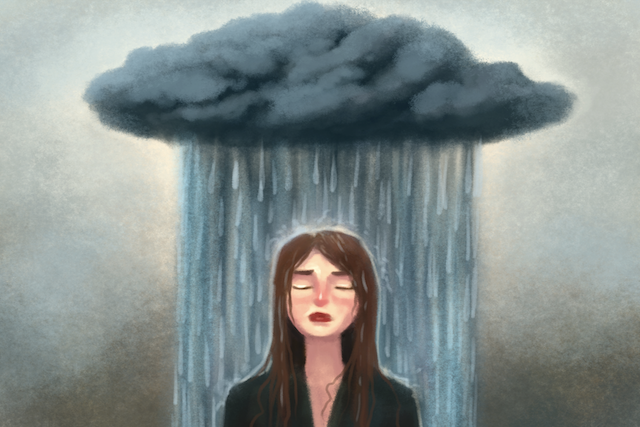 “Whatever you’re feeling, it will eventually pass.”  ~Lori Deschene

Can you feel an intense emotion, like anger, without acting on it, reacting to it, or trying to get rid of it?

Can you feel such an intense emotion without needing to justify or explain it—or needing to find someone or something to blame it on?

After successfully dodging it for two years, I recently caught Covid-19. The physical symptoms were utter misery. But something much more interesting happened while I was unwell.

The whole experience brought some intense emotions to the surface. Namely seething anger about something that had nothing to do with the virus.

In the handful of days that my symptoms were at their worst, I was absolutely livid. And while on some level it made sense that I was angry that getting this sick was both extremely unpleasant and delaying work on a project I was all fired up about, the anger was manifesting with a deeper-rooted blame.

I grew up in a religious denomination that had a profound effect on my childhood and adolescence. It taught me through debilitating fear, division, and confusion. It ingrained black-and-white rights and wrongs for living, thinking, and being that had never made sufficient sense to me, no one could adequately explain, and were damaging for me on a number of levels.

In the past couple of years, I worked through its various effects with shadow work, inner child healing, forgiveness, and even quantum energetic healing. Each of these modalities supported me immensely with healing different layers.

But the emotion of deep anger I harbored clearly hadn’t gone away, and it simply needed to be felt.

The more we learn to observe and witness our emotions, the more acutely aware we become of where they’re stemming from, and the more we’re able to notice and catch ourselves when we’re associating our emotions with narratives and situations that are not in fact to blame for how we’re feeling.

Although I’d initially managed to fashion some connection between being unwell and the church I still harbored so much anger toward, I became increasingly aware that there was none. My inclination to blame the church was part of an ongoing pattern. And it was time to break this pattern.

At the same time, I’d recently become very aware that whenever I’d hear mention of the church or any of its associated beliefs, a brief surge of anger would leap up in me. I was still feeling triggered.

I was very ready to move beyond these patterns of blame and anger. And getting to that inner peace I so wanted to feel meant addressing this on an emotional level. I realized that what I needed was to actually sit with these feelings so they could be fully acknowledged and allowed to move through me.

The only person who is ever responsible for your emotions is you. And your emotions are simply powerful feedback. They show up for one of two dominant reasons.

Either they’re unresolved past emotions that are surfacing because they’re ready to be acknowledged and felt now, or they’re feelings that demonstrate how a situation is resonating for you—in other words, they’re your own inner compass.

Sadly, although traditions like Buddhism have been teaching us how to develop emotional awareness for thousands of years, we’ve somehow landed on two dominant, ineffective responses.

Acting on our emotions or trying to brush them under the rug.

Brushing an emotion under the rug will only keep it trapped inside of you. Meaning it will resurface to bother you as many times as it needs to in future, until you deal with it.

And the practices of toxic positivity fall under this category. Write a gratitude list and look for the best feeling thought you can find, they say. In other words, avoid the “negative” emotion for now and let it fester under the surface a little while longer.

Newsflash: No emotion is negative unless it’s fueling a negative action or reaction. It’s simply feedback pointing you toward growth or clarity.

Which brings me to the next dominant response we resort to. Acting on the emotion (by yelling at someone, for example) will at least give it an opportunity to release, but will most likely create consequences that won’t serve you. We’ve all been there and done that, so no judgment here.

As I emphasised earlier, the only person who’s ever responsible for your emotions is you. And we tend to act on our emotions by deflecting this responsibility. So we learn, understand, and gain nothing from them.

So, I sat with the anger. I was fully present with it—by itself, separate from any experience or event that I could possibly associate it with.

I acknowledged it, felt its full intensity, and breathed through it. I sat with the parts of me that felt this emotion, with compassion. I surrendered to letting it move through me.

Despite having felt the intensity of this anger for a few days, it released fairly quickly when I leaned into it. And when it released I was able to see pretty clearly why being ill had triggered this anger.

I’ve also noticed that since this whole experience, the little surges of anger I’d previously felt have gone away. So far I haven’t felt those triggers since, which is a relief.

Before I go any further, I want to acknowledge that many of us are carrying deep trauma that’s often too painful to even fathom triggering. So have compassion for yourself in whatever you feel, and don’t put off seeking the right support to work through your emotions if you feel you need this.

Now, this might sound counterintuitive, and it’s incredibly uncomfortable to do at first. But real emotional awareness—and maturity—means sitting with the emotion and feeling its fullness.

It’s identifying what this emotion is and how it feels. Including where you can feel it physically.

It’s giving yourself some time and space to focus on really leaning into the emotion, and separating it from any narrative or incident it may be associated with. Focusing on the emotion by itself in isolation allows us to process it. Without blame, justification, or self-pity.

When you can truly feel, acknowledge, and breathe through it, it releases. And when it’s released you’re able to understand what it represented for you. You grow through it.

This may take time, but a feeling is only ever there to be felt. And until it is, it will be increasingly vociferous in how it tries to get your attention.

This can require a lot of courage, especially because too many of us have been conditioned to fear feeling our emotions and believe that we can’t handle them.

But if you need to cry, cry. If it feels intense, this is where deeply buried stuff is surfacing for release.

And when you let an emotion move through you, you let it move out of you.

This doesn’t mean that you’ll never feel another “negative” emotion ever again.

But it does mean that you’ll understand how to respond to these emotions, and allow them be felt and understood with a lot more compassion.

And that’s more than worth the temporary discomfort.

Nadine is a certified coach and Rapid Transformational Therapy (RTT®) practitioner. She combines coaching with deeper inner work to help conscious leaders take a purpose-led and intuitive approach to their life and work. She supports leaders to dig deep into what drives them on a subconscious level, connect with their purpose and break through patterns that don’t serve their higher potential. Visit her at nadine-saad.com or on Instagram.

Your Relationship With The Clock Dictates Your Happiness Your Relationship With The Clock Dictates Your Happiness