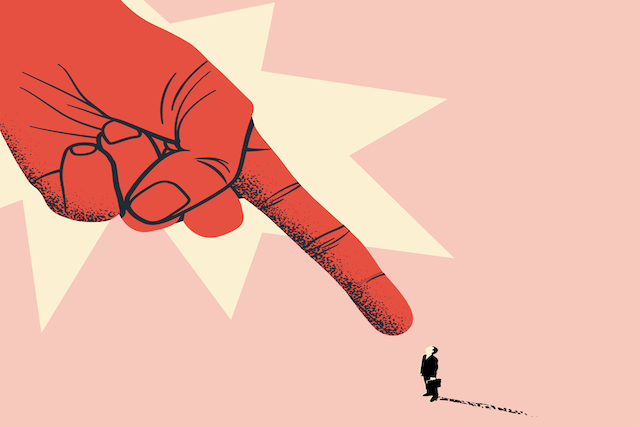 “It’s true: people can change. People can learn, grow, and surprise us. But if someone does the same thing, over and over again—if they keep hurting, disrespecting, or disappointing you—it’s time to accept the way things are and ask yourself if you can really live with this. You can’t make someone change their pattern if they’re not willing or ready, but you can stop participating in it.” ~Lori Deschene

I had quit before. It was one of those jobs that saw a lot of people come and go: a gig writing for a local newspaper that paid by the word, and was anything but freelance once you considered what feeling free is supposed to mean.

Feeling free shouldn’t mean getting calls and texts in the middle of the night, consisting of single four letter words, like “f*ck,” or, if my editor was feeling chatty, “you need to fix this immediately.”

Feeling free shouldn’t mean sitting through a four-hour-long meeting at city hall without being compensated for that time, only to write an article about it, have said article rejected, and then get nothing—not a single dime—for your efforts.

If this woman paid in criticism, I’d be rich. She was rich. In fact, her food reviewer quit because she didn’t pay him beyond comping his meals. He works for CNN now.

Anyway, when I cried to a friend about her, he said she was probably a “borderline” personality. Along with her insults came a great deal of praise. She said I was the best writer on her team, that the flow of my stories was, quote, unquote, beautiful.

I hate you! Don’t leave me! was the vibe in most of our conversations.

She suggested liposuction for my chubby cheeks and called my freckles “sun damage.” Sometimes her emails came with emojis of praying hands.

Please wear make-up when you do the interview.

Please get Grammarly. You make soooo many mistakes.

But I sucked it up, returning to her when freelance money was scarce, mostly because I simply loved to write. Just seeing my byline was like eating a piece of chocolate on a sad, rainy day.

If I liked a story, I literally whistled while I worked.

Being a reporter is all the things I love: meeting new people, writing features about them, feeling the rush that comes from having an article shared thousands of times.

I even got recognized at parties miles from home—by readers who said they only subscribed to the paper for my stories. I won a Florida press award in 2020. I learned things about people and places that informed my novels, eventually giving me the courage to start my own publishing company.

I’m getting a fifth novel published. I have letters from students who took my English classes, claiming I’ve made a difference in their lives.

Taking stock of my successes, I realized this toxic boss wasn’t really part of them. She was just a moldy, old stepping stone that cut my feet every time I revisited her.

The realization I needed to cut her out of my life came when my dream job, teaching Shakespeare, suddenly ended. In a way, I had no right to be surprised. I was just a sub, after all, and the school had found a certified English teacher.

But the thing is, I’d had six blissful months of earning 1,000 times the rate Attila the Hun at the paper paid.

I was used to working insanely hard for insane people, and teaching could be that way too sometimes, but at least you got paid—and no one called you in the middle of the night.

It seemed I had grown addicted to civil treatment that came with direct deposit.

At the paper, we earned ten cents a word and had to take all our own pictures, tag and format each article to her blogging platform, follow up with our interview subjects, and make last-minute changes to virtually every story.

Toward the end, I broke one of her rules and would show people my story drafts before hitting publish. She did not allow this because, she claimed, this was her content, not theirs. She would shape it, not them.

The day I quit, she had done one of her classic sociopathic hit jobs on me—the kind that made my head pound as though my temples were being crushed in a Medieval torture device.

I had written an article about a new real estate project in town, and not even one hour after it went live, she began texting me screenshots of reader complaints.

She demanded I either edit the article or take it down. Either way, I probably wouldn’t get paid.

I walked away from her text calling me an unprofessional hack and decided to really think about a response before I reacted.

My husband and I took a sunset walk with our dog. He said he’d be disappointed in me if I didn’t finally—after nearly five years of abuse—just walk away from this deranged person. Everyone was sick and tired of hearing me complain. It was time to kick that door shut and seal it with super glue.

So I did. As soon as I returned from our walk, I sipped from a tall glass of water and calmly picked up my phone, punching in a text with one finger.

I didn’t bother to punctuate it.

To make good on my word, I spent the next half-hour blocking her and her media company on every app upon which we share a mutual follow.

I even figured out how to send her emails directly to the trash, but I did see one before it went into the can.

It said I lacked the courage to admit I’d made a mistake, and she was disappointed in me. I should stop making excuses. I’d left my interview contacts in limbo.

The last person I’d interviewed was a pastor at a Presbyterian church. We’d not met face to face because of a scheduling conflict.

He gave me a great interview—my best story of 2022. He said he wanted people to know Jesus but not in the way of a bunch of useless facts; we should know him as someone we can humanize and learn from.

He contacted me on the day I quit to thank me for writing about him and his family. He, his wife, and their two-year-old son, had just moved from Georgia. They’d never seen Florida before and found the subtropics both fascinating and beautiful.

But he’d also written me to ask if I could change the caption on his photo.

Journalism can be grueling.

I told him he’d have to email my editor about that as I no longer worked for the paper.

“Good for you,” he wrote. “You did an excellent, professional job. I’d love to meet you in person some time.”

I told him I’d check out the church, maybe even hear his Mother’s Day sermon with my kids. I’d have more family time without a toxic boss in my life.

That last part I left out.

As for my pervasive fear that leaving the paper would end my writing career, I’ve already gotten a call from the editor of her rival paper and am meeting him for coffee soon.

Meeting new people is everything to me. You can even write about them while simultaneously getting state certified to teach!

Anyway, I wrote this essay on quitting because sometimes it’s the right thing to do. When you’ve given someone all that you have to give, and it is still, somehow, not good enough, maybe quitting is the only thing you can do. It’s a fresh start, and that Mad tea party you are leaving? It’s just going to keep going on, with or without you.

Jennifer Russon is an indie author of four novels with a fifth on the way. She is also owner and editor-in-chief at Swallow Publishing. Her days are filled with long walks and daily gratitude practice. She lives in South Florida with her family.