Reports of Serious Injuries After COVID Vaccines Near 112,000, as Pfizer Asks FDA to Green Light Shots for Kids 5 to 11

What Is It? What Can You Do About It?

COVID Authoritarians Are The Cause Of America’s Problems, Not The Unvaccinated

Data released Friday by the Centers for Disease Control and Prevention (CDC) showed that between Dec. 14, 2020 and Oct. 1, 2021, a total of 778,685 adverse events following COVID vaccines were reported to the Vaccine Adverse Event Reporting System (VAERS). The data included a total of 16,310 reports of deaths — an increase of 373 over the previous week.

There were 111,921 reports of serious injuries, including deaths, during the same time period — up 6,163 compared with the previous week. 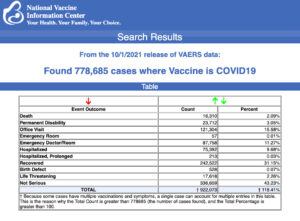 The data come directly from reports submitted to VAERS, the primary government-funded system for reporting adverse vaccine reactions in the U.S.

Every Friday, VAERS makes public all vaccine injury reports received as of a specified date, usually about a week prior to the release date. Reports submitted to VAERS require further investigation before a causal relationship can be confirmed.
Historically, VAERS has been shown to report only 1% of actual vaccine adverse events.

Other recent deaths include a 17-year-old male (VAERS I.D. 1689212) with cancer who was vaccinated April 17, tested positive for COVID on July 20, was hospitalized and passed away Aug. 29; and a 16-year-old female (VAERS I.D. 1694568) who died from a pulmonary embolism nine days after receiving her first Pfizer dose.

On Aug. 29, Jessica went to a Seattle pharmacy to get her COVID vaccine and was told she would be receiving J&J’s shot. She was “vehemently opposed” to taking the vaccine, “considering her stay-at-home mom status, state of good health and young age in conjunction with the known and unknown risk of an unproven vaccine,” her husband said.

But Jessica was pressured to get the vaccine due to a vaccine mandate at their child’s school requiring “room moms” who wished to serve in the classroom be fully vaccinated.

According to Jessica’s VAERS report (VAERS I.D. 1683324), she experienced blood clots in her ovarian and renal veins, and a brain hemorrhage that led to tissue damage. Although doctors tried to relieve the pressure on her brain by performing a craniotomy, they were unsuccessful.

Jessica was ultimately pronounced brain dead, removed from life support and passed away. Doctors confirmed the cause of death was VITT.

Pfizer and its German partner, BioNTech on Thursday asked the U.S. Food and Drug Administration (FDA) to authorize their COVID vaccine for emergency use for children 5 to 11 years old. The FDA advisory committee is scheduled to meet Oct. 26 to discuss Pfizer’s pediatric COVID vaccine.

Pfizer and BioNTech submitted initial data to the FDA last month for a regimen of two 10-microgram doses in children — one-third the amount given to older patients — but had not formally requested authorization until now.

According to Pfizer’s Sept. 20 press release, the trial didn’t show the vaccine reduced hospitalizations or even mild cases. But it did reveal side effects generally comparable to those observed in participants 16 to 25 years of age.

As The Defender reported, two studies published Wednesday in the New England Journal of Medicine confirm any immune protection offered by two doses of Pfizer’s COVID vaccine drops off after roughly two months.

A prospective longitudinal study from Israel covering 4,800 healthcare workers showed antibody levels waned rapidly after two doses of vaccine “especially among men, among persons 65 years of age or older and among persons with immunosuppression.”

A second study from Qatar looked at actual infections among the nation’s highly vaccinated population, who mostly received Pfizer’s COVID vaccine. Estimated effectiveness against SARS-CoV-2 infection was negligible for the first two weeks after the first Pfizer dose, increased to 36.8% in the third week after the first dose, and reached its peak at 77.5% in the first month after the second dose.

By months five five  through seven, researchers said vaccine efficacy reached a low level of approximately 20%. Pfizer has consistently claimed the company’s own efficacy data demonstrate 95% efficacy against SARS-CoV-2, which was not observed in this study.

Sweden, Denmark and Finland will pause the use of Moderna’s COVID vaccine for younger age groups after reports of possible rare side effects, including myocarditis.

Finland on Thursday paused the use of Moderna’s COVID vaccine for younger males due to reports of myocarditis, joining Sweden and Denmark in limiting its use after a Nordic study involving Finland, Sweden, Norway and Denmark found men under the age of 30 who received Moderna’s vaccine had a slightly higher risk than others of developing myocarditis.

All four countries said they would instead give Pfizer’s vaccine to men born in 1991 and later, despite research that shows a similar risk of myocarditis associated with Pfizer’s vaccine.

A paper published Sept. 30, in Eurosurveillance showed a fully vaccinated patient in a hospital setting  rapidly spread COVID to fully vaccinated staff, patients and family members — despite a 96% vaccination rate and use of full personal protective equipment.

Of the 42 cases diagnosed in the outbreak, 38 were fully vaccinated with two doses of Pfizer and BioNTech’s Comirnaty vaccine, one had received only one vaccination and three were unvaccinated.

The authors said the study challenges the assumption high universal vaccination rates will lead to herd immunity and prevent COVID outbreaks, as 96.2% of the outbreak subjects were vaccinated, infection advanced rapidly and viral load was high.

In a study published Sept. 30 in the peer-reviewed European Journal of Epidemiology Vaccines, researchers investigated the relationship between the percentage of population fully vaccinated and new COVID cases across 68 countries and 2,947 U.S. counties that had second dose vaccine, and available COVID case data.

Children’s Health Defense asks anyone who has experienced an adverse reaction, to any vaccine, to file a report following these three steps.

Can accountants save the earth? Don’t count on it.

Who Do You Think You Are?

What Is It? What Can You Do About It?

Patrick Wood, GuestWaking TimesAmerica is awash with harmful and dangerous propaganda, but few people understand what it is, how it works and what can be done...

COVID Authoritarians Are The Cause Of America’s Problems, Not The Unvaccinated

Get the latest Waking Times articles delivered to your inbox. Sign up here.Brandon Smith,  Alt-MarketWaking TimesIt’s an odd dynamic – One would think that if the covid...

The Incredible Power of Language

Get the latest Waking Times articles delivered to your inbox. Sign up here.Jack Fox-Williams, New DawnWaking TimesWords hold incredible power. When used poetically, they can evoke...

Get the latest Waking Times articles delivered to your inbox. Sign up here.Jon Miltimore, FEEWaking TimesOn Friday, the San Francisco Chronicle published an article noting that California has...

Dustin Broadbery, The CogentWaking TimesAs we approach a winter of discontent and global food systems go from bad to worse, there’s trouble in paradise.At the root of these...

Who Do You Think You Are?

To save forests, researchers are hooking trees up to Twitter

Mob Morality and the Unvaxxed

No, Your Feet Don’t Clean Themselves in the Shower

25 Movies That Could Never Be Made Today

Waiting on U.S. Mandate, Some Nursing Homes Are Slow to Vaccinate Staff