in NEW TECHNOLOGIES
Reading Time: 21 mins read
A A The $49.99 Philips Hue Tap Dial switch is a smart lighting controller for the Hue superuser. It’s the most powerful and innovative Hue accessory so far, with four buttons and a physical dial for dimming. Out of the box, the buttons and dial are tied to a zone or room, making it seem like an overpowered Hue Smart Dimmer Switch. But why limit yourself to one room when this can control your Hue lights throughout your house?

The Tap Dial is a wireless, battery-operated smart switch that can turn your Philips Hue lights on and off, brighten and dim them, and set lighting scenes. With a magnetic base, it can be attached to its included wall plate like a regular wall switch or placed on any metallic or flat surface for use as a remote control.

It’s part of Hue’s smart lighting ecosystem, which works with Apple HomeKit, Amazon Alexa, Google Home, and Samsung SmartThings. Signify (owners of Hue) also confirmed to The Verge that the switch will be upgraded to work with the new smart home standard Matter. That means one day, it might be able to control a lot more than just Hue lights. 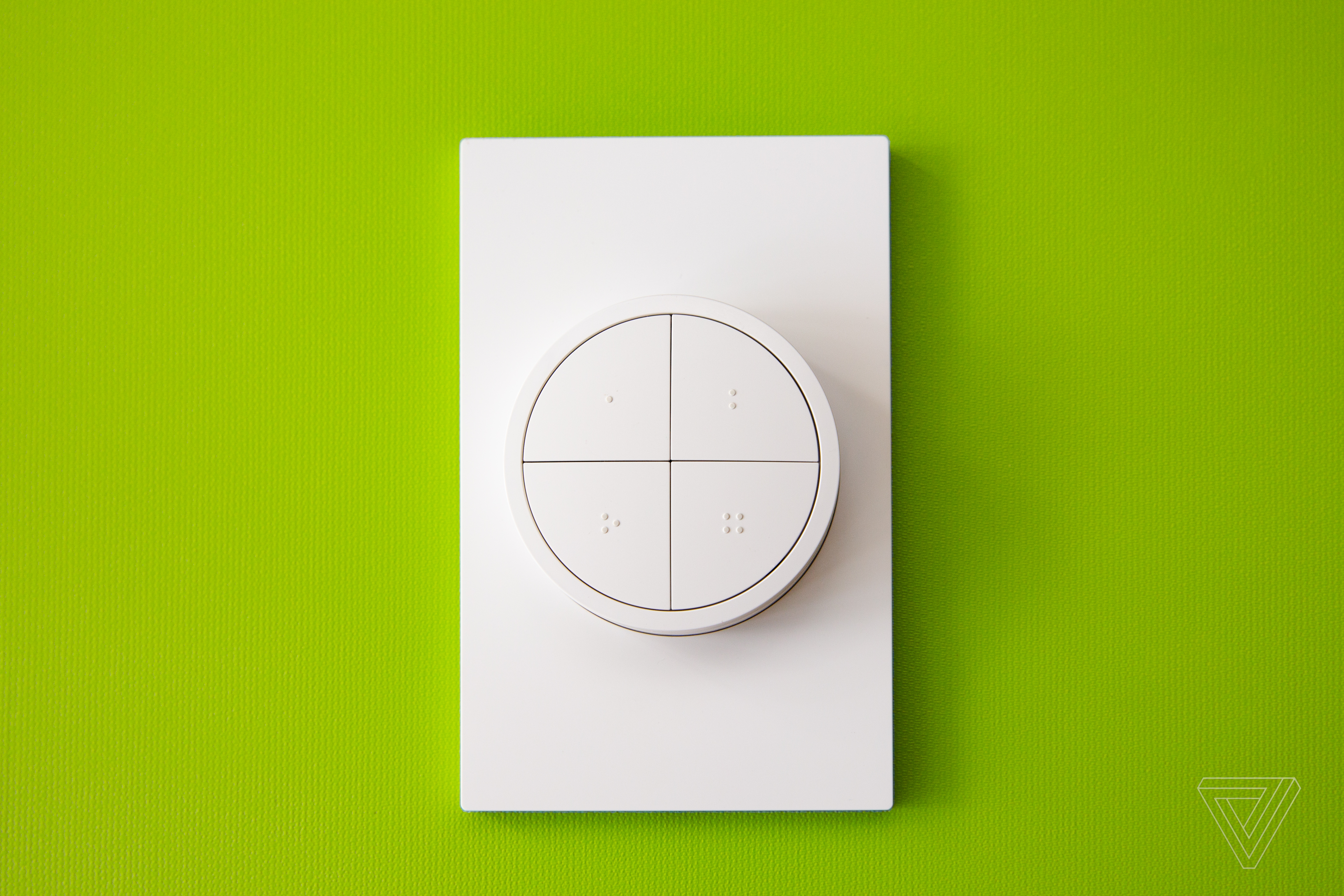 How we review and rate products

The Tap Dial is hefty, weighing just over two and a half ounces (an ounce heavier than the Apple TV remote). But that weight is to its advantage; you can turn the dial while it’s sitting on the table, and it won’t slide around. The dial itself has a good solid feel as you turn it, with nice haptic feedback. It’s a lot like rotating a Nest Learning Thermostat, and it’s only a smidge smaller than that. It also worked quickly and reliably, and the dimming action was smooth and responsive, with no noticeable lag.

Out of the box, it’s set up to dim whichever lights, room, or zone you pair it with in the Hue app. Buttons one through three adjust the light levels, and the fourth cycles through five Hue scenes. The dial gives more precise dimming, and a long press on any button turns the lights off. (Hue scenes are different combinations of brightness, color temperature, or color, depending on the types of bulbs you have.)

But there’s no real reason to buy the Tap Dial if you’re just going to control a single room or zone. That’s what the Hue Dimmer Switch does well at about half the price. The Tap Dial shines as a multizone controller for people with lots of Hue lights.

I set up the Tap Dial in my entry hall, with each button programmed to control a different part of my house. Button one turned on all the Hue lights in the house, button two those in the entry hall and living room, button three the upstairs lights, and button four the downstairs lights. I also added some colorful scenes for subsequent button presses (you can press each button up to 10 times to cycle through additional scenes) but didn’t find myself using them often.

I set the dial to control all the lights at once. One limitation of using the Tap Dial this way is that the dial can only control either all lights or a single room or zone. I’d like it to dim or brighten the lights for whichever button you just pressed. The slightly clunky workaround here is to use the second and third presses on each button to dim the lights that aren’t controlled by the dial.

The upside is I have a central lighting controller that gives me physical access to all the lights in my house without having to pull out a phone or use a voice command. That makes this gadget really useful. If my house were fully outfitted with Hue lights, I would consider this an essential purchase. It isn’t, though, and until this can effectively control every smart light in my home, regardless of brand (which it may be able to do when Matter gets here), this makes it more of a nice-to-have than a must-have for me.

The other issue is that even with what I thought was an intuitive setup, it’s not easy to remember which button does what, and I’d like the option to label them with a little icon or emoji.

If your whole home is kitted out with Hue bulbs and light fixtures, this is a handy physical controller to manage them all. If you have Hue outdoor lighting, it can be programmed to control those, too. At $50, it’s an expensive piece of kit, plus it uses Zigbee, so you have to have a Hue Bridge ($59.99), but there aren’t many good solutions for dimming smart bulbs.

Most smart dimmer switches only work with standard bulbs, not smart ones. Your other options for Hue bulbs, outside of asking a voice assistant to set the lights to 70 percent or hopping into a smartphone app, include pressing and holding a button on the Hue Dimmer Switch ($28) or twisting the rotating dial on the Lutron Aurora ($40), a retrofit option for toggle switches. I’ve tried all these, and the Tap Dial is definitely the nicest to use.

If you only have a few Hue bulbs, you’ll be better off with the cheaper Hue Smart Dimmer, which can do everything this device does, just with less individual room control and with a clunkier interface for dimming.

The Smart Dimmer also has the option of time-based lighting — where the lights turn on at a certain brightness based on the time of day — a great feature that, oddly, is not yet offered on the Tap Dial. Kelly Hrank, head of PR at Signify, told me the feature is coming soon. The switch is also not integrated into the Hue Labs feature of the Hue app, which lets you set up more powerful lighting scenes, and Hrank says there are no plans to do so.

Like the earlier now discontinued Hue Tap, the Tap Dial can be used as a HomeKit scene controller, but right now, you shouldn’t bother. The dial doesn’t work in HomeKit (which is a limitation of Apple’s, not Hue’s), and you can only use a single press to trigger Automations. That makes this $50 dial switch a less useful version of the Wemo Stage I just reviewed, which is designed specifically for HomeKit and was quicker at running HomeKit Automations than the Tap Dial in testing.

The Tap Dial will be getting more features shortly. The option to “Configure in HomeKit” has been available for Hue accessories for years, but the Hue app now contains an option to configure the Tap Dial in another app — the Tap Dial is the first Hue accessory to support this. The option doesn’t do anything yet, but Hrank told The Verge that Amazon Alexa will be among the apps you can set the Tap Dial up in.

This should mean you’ll be able to use the Tap Dial to control any Alexa-compatible smart device (not just Hue, and not just lights), as is the case if you use it in HomeKit. Plus, if the dial is exposed to Alexa, this would be a very useful lighting control for the vast Alexa ecosystem, especially if you could use the buttons to trigger Routines. I’ll test this as soon as it is available and report back.

All this openness is likely part of the preparation for Matter, a unique feature of which is multi-admin control — the option to set devices up to be controlled by any Matter-compatible ecosystem. With Matter-support, the Tap Dial could be used to control every light in my house no matter who made them — a much better proposition than being locked into Hue’s expensive ecosystem.

But don’t buy the Tap Dial now for what it might be able to do later. If you have Hue lights throughout your home and want to be able to control them from a single device (with a physical dimmer!), the Tap Dial is useful now. For anyone else, wait and see what’s coming.

Choose Between In-Person and Online Meetings