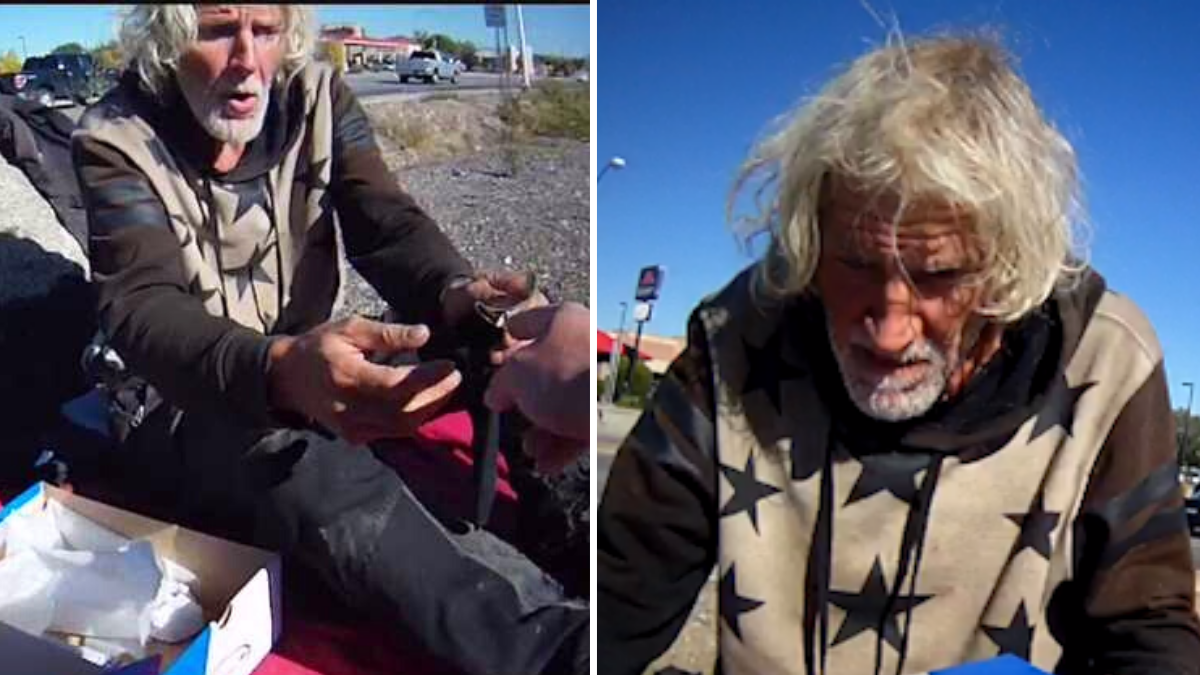 It’s a sad reality that police often find themselves in conflict with their community’s most vulnerable segment — the homeless. After one officer was caught on camera abusing a homeless person, one angry resident said simply, “Something needs to change with the police.”

For a shining example of what that change should look like, look no further than Officer Mark Gurule of Los Lunas, New Mexico.

He was called to Highway 47 and Main Street to see if a sleeping homeless man was alright. While he was alive, he definitely wasn’t fine. Gurule noticed that the man, whose name was Mark, was barefoot. His socks were drying while his shoes had massive holes in them.

With it being winter — with blazing days turning into frigid nights — Mark was in real trouble.

That’s when Gurule thought outside the box of police procedure to change his life.

How A Police Officer Helped A Homeless Man Without Shoes

With the motivation to help, Gurule made a short trip to the Big 5 Sporting Goods store, returning with a new pair of sneakers along with heavy socks to keep Mark warm and cozy.

His lapel cam captures Officer Gurule bringing the goods to Mark, saying that the store “hooked him up.” Gurule then waited to make sure that the shoes fit Mark’s feet just right.

“I appreciate you being out here, and being cool with us,” said Gurule. Then, as he was leaving, he said, “Anything you need man. Just let us know and we’ll try to help you out.”

He also reached in his pocket and gave Mark $20. “You get yourself something to eat and you stay out of this weather ok?”

Gurule told KOAT that Mark didn’t have to say a word to know that this call was a success. “The most rewarding feeling was when the man put on his socks and shoes and he gave me thumb-ups with a big smile on his face,” he said.

Gurule was also given a well-deserved commendation by the Los Lunas authorities. Talking about Mark, Officer Gurulue said that he deserves equal respect.

RELATED: TikTok Prankster Unexpectedly Befriends Homeless Man, Helps Him Get Out Of Debt

He’s just as much a member of this community as anyone else.

By crossing the blue line to connect with Mark, Officer Gurule reminds us that a community can only be a success if everyone is included. And for everyone to be included, it’s up to all of us to take that first step across the aisle to offer a helping hand.

A Few Years Ago, He Lived In A Cardboard Box – Now He’s A CEO Who Hires The Homeless

“Compassion is an action word with no boundaries.” – Prince

How to Clean the Worst Hard Water Stains From Your Sink, Tub, and Shower