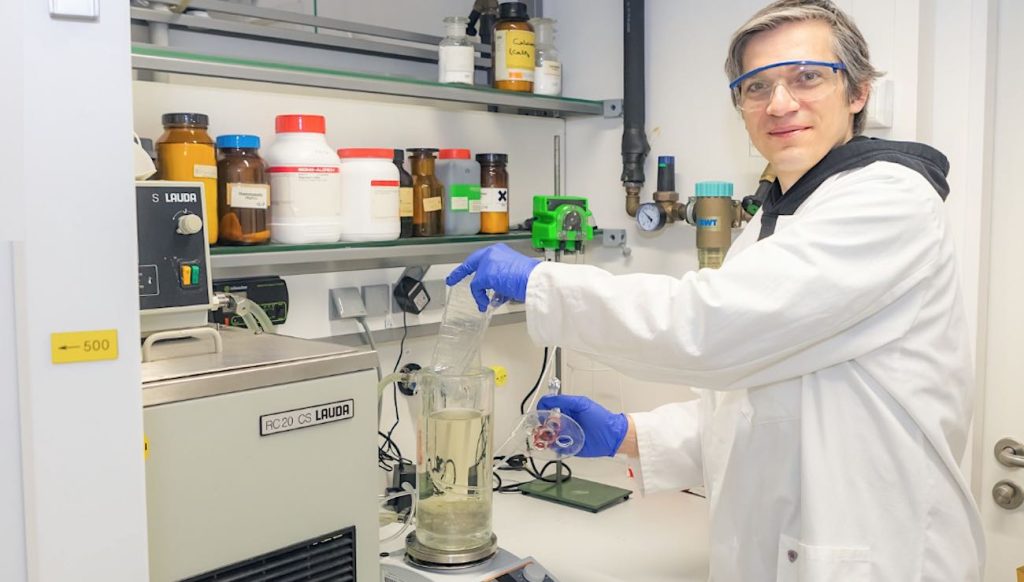 PET plastic bottles, food containers, and lightweight wrap for packaging have become a problem if they’re not recycled—but scientists searching through compost piles have discovered an enzyme that degrades the plastic in record time.

The enzyme PHL7, which the German researchers found in a compost heap in Leipzig, could make bio-PET recycling possible much faster than previously thought—and their compelling photos appearing in a scientific journal are an eye-opener.

One way in which enzymes are used in nature is when bacteria decompose plant parts. It has been known for some time that some enzymes, so-called polyester-cleaving hydrolases, can also degrade PET. For example, the enzyme LCC, which was discovered in Japan in 2012, is considered to be a particularly effective “plastic eater”.

The team led by Leipzig University researcher Dr. Christian Sonnendecker, has been searching for previously undiscovered examples of these biological helpers as part of the EU-funded projects MIPLACE and ENZYCLE. They found what they were looking for in the Südfriedhof cemetery hidden inside their compost sample.

Out of seven different enzymes, PHL7 achieved results in the lab that were significantly above average—twice as active as the previous leader in PET decomposition, LCC.

They added PET, which is the most widely produced plastic, to containers full of an aqueous solution containing either PHL7 or LCC, then measured the amount of plastic that was degraded in a given period of time and compared the values with each other.

The results, published in ChemSusChem, showed that within 16 hours, PHL7 caused the PET to decompose by a whopping 90 percent; in that same time, LCC managed a degradation of just 45 percent. “So our enzyme is twice as active as the gold standard among polyester-cleaving hydrolases,” Sonnendecker said.

RELATED: New Plant-Derived Sustainable ‘Plastic’ is Tough as Bone and Hard as Aluminum

For example, PHL7 broke down a plastic clam-shell container (punnet)—the kind used for selling ready-to-eat food in supermarkets—in less than 24 hours. The researchers found that a single building block in the enzyme is responsible for this above-average activity.

At the site where other previously known polyester-cleaving hydrolases contain a phenylalanine residue, PHL7 carries a leucine.

Biological PET recycling has some advantages compared to conventional recycling methods, which rely primarily on thermal processes where the plastic waste is melted down at high temperatures. These processes take a lot of energy and the quality of the plastic decreases with each recycling cycle.

Enzymes, on the other hand, only require an aqueous environment and a temperature of 65 to 70 degrees Celsius (140-160 F.) for their work. Another plus is the fact that they break down the PET into its components—terephthalic acid and ethylene glycol— which can then be reused to produce new PET, resulting in a closed cycle. So far, however, biological PET recycling has only been tested by a pilot plant in France by Carbios.

Professor Wolfgang Zimmermann, who played a key role in establishing research activity into enzyme-based technologies at Leipzig University, believes the enzyme can make an important contribution. “The biocatalyst now developed in Leipzig has been shown to be highly effective in the rapid decomposition of used PET food packaging and is suitable for use in an environmentally-friendly recycling process in which new plastic can be produced from the decomposition products,” he said in a statement.

The researchers from Leipzig are looking for industrial partners for using PHL7 to advance biological recycling, convinced that the higher speed will significantly reduce recycling costs. Over the next two to three years, they aim to create a prototype that will make it possible to quantify the economic benefits of their rapid biological recycling process more precisely.

The scientists on Professor Jörg Matysik’s team at the Institute of Analytical Chemistry also want to elucidate the structure and function of the enzymes using NMR spectroscopy.

They are also working on a new pretreatment method to solve a problem in biological recycling: PET decomposition by enzymes has so far only worked for so-called amorphous PET, which is used in things like fruit packaging, but not for plastic bottles made of PET with higher crystallinity.

BREAK Down Negativity by Sharing This Breakthrough on Social Media…